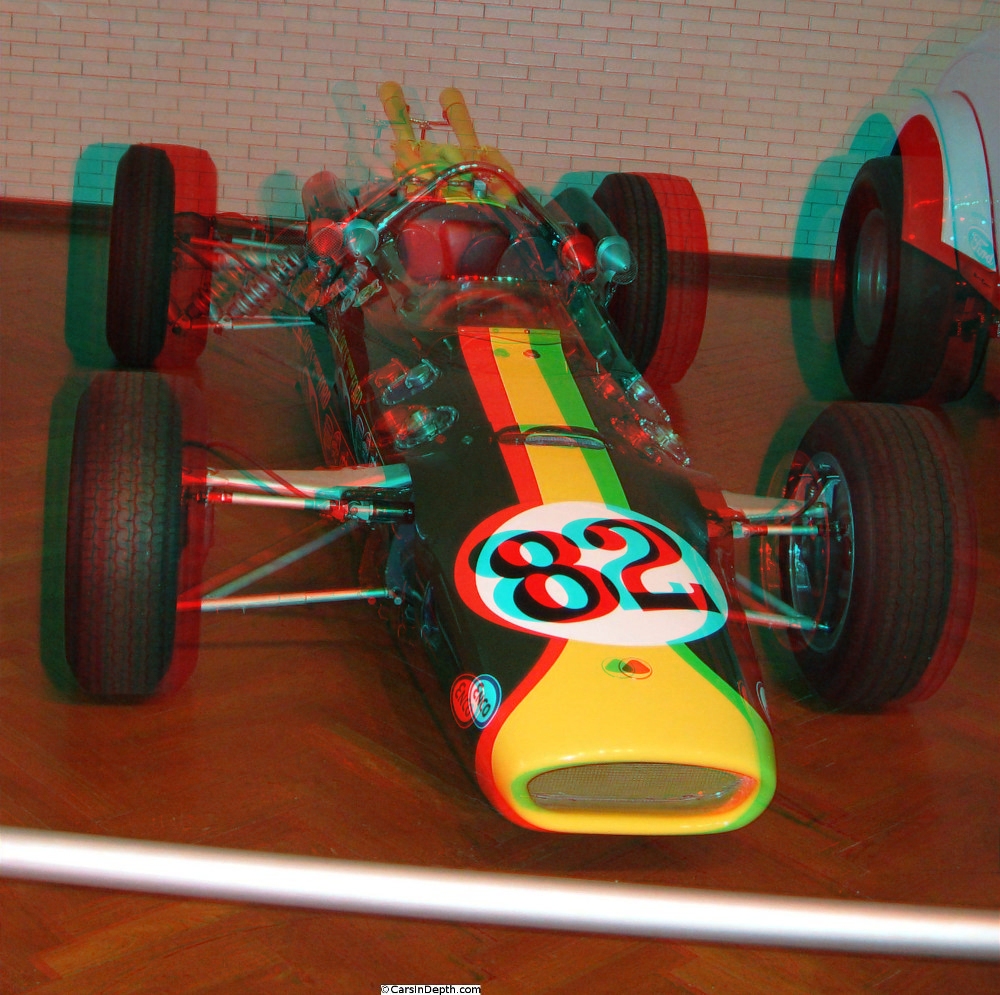 In honor of Jason White’s first post on Cars In Depth, a styling analysis of Lotus’ new product concepts (until Dany Behar actually produces all those models, I’ll call them concepts), here are some stereo images of the Lotus 38 that changed racing. Piloted by Jim Clark, it was the first mid-engine design to win the Indianapolis 500. Clark’s Indy racer was powered by a Ford V8, just one of the facets of the relationship between Colin Chapman’s Lotus and the Ford Motor Company in the 1960s. Ford branded engines didn’t just power Lotus’ Indy and F1 efforts, Lotus used Ford’s 1600cc Kent block as a basis for their classic Lotus Twin Cam engine.

Much of the Ford museum’s car display is being reconstructed but we were lucky that the Lotus 38 was on display during our recent visit there.

Follow the jump for your choice of 3D modes or choose 2D viewing.

The 38 was flanked by the LeMans winning Ford GT MK IV (complete with Gurney bubble) and George Montgomery’s 1933 Willys gasser. The Jim Clark Lotus 38, one of the most historic racing cars of all times, was recently restored by Clive Chapman’s Classic Team Lotus for the museum. The restored racer returned to the scene of its glory when Road & Track arranged for Indy 500 winner Dario Franchitti to take it around the Brickyard one more time. It was a particular thrill for Franchitti, a Scotsman who grew up idolizing Jim Clark.

Jason analyzed the styling of future Lotus road cars. If I can offer a few words about the 38, while its shape is pretty generic for mid 1960s formula cars (Chapman had not yet glommed onto aero as a competitive advantage), it’s livery is almost perfect. In the colors of the lotus badge, green (a shade of BRG?) with the nose in a bright yellow that tapers to a broad racing stripe down the middle of the car. To keep the color scheme harmonious, the “bundle of snakes” exhaust for the Ford V8 was also painted yellow. If the word “iconic” ever applied, it applies to the Lotus 38. The flow of the yellow from the nose to the elevated exhaust pipes, gives the car an impression of motion even standing still.

Scroll down for [2D] Video of the Classic Team Lotus restoration, and of Franchitti’s drive of the 38 at Indy. There’s also an interview with Dario for RacingInAmerica.com. Racing In America is the Ford museum’s new project and exhibition intended to record the history of auto racing in the United States. If you add them to your Facebook or Twitter account you will be entered into a contest to win a vial of oil from Clark’s Lotus.

Click on the image gallery below to launch the Stereo Photo Viewer applet to view in optimal 3D (or 2D if you don’t have 3D glasses or a 3D display).