Posted on November 24, 2011 by Ronnie Schreiber 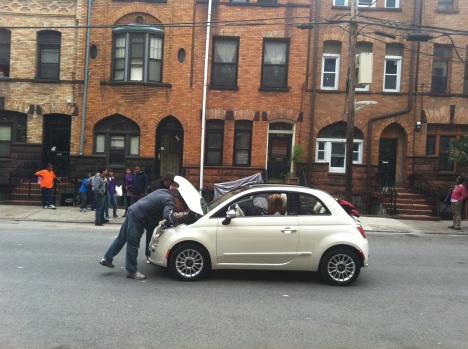 The promotional tie-up between the Fiat brand in America and entertainer Jennifer Lopez was supposed to be the foundation for the launch of the Fiat 500 on this side of the Atlantic. Instead its become a gaffe filled comedy of errors. The first step in the use of the singer/dancer as a celebrity endorser, said to be the brainchild of Chrysler head Olivier François, was to use the 500 in filming the music video for Lopez’ recent release Papi. That might not have been a bad idea had François not also decided on using a 30 second trailer from the video as a commercial for the car. The result made no sense and was panned by Pete DeLorenzo as the worst car commercial of the past decade. This was followed up by an actual commercial featuring J-Lo, known for her self-professed “Jenny on the block” persona, apparently driving in her old NYC neighborhood. I say apparently because first it was revealed that much of the principal photography with Ms. Lopez was not shot on location in New York. Then it came to light that those scenes that were actually shot in New York used a body double for Lopez. It turns out that really wasn’t Jenny driving a Fiat 500 on the block. Now it turns out that the Fiat 500 used in shooting the New York scenes broke down in the middle of the scene, needing repairs to complete the shoot.

Ed Morales, a writer, poet and adjunct professor, lives near where the commercial was filmed in Brooklyn. About a month ago on his blog he reported having seen the shoot and apparently shot this video of the filming, and these photos of the disabled Fiat 500. The part of the commercial where children start running after Lopez in her white Fiat was shot on his block.

I wanted to run downstairs with one of those little plastic bubble blowers and mingle, but there was no J-Lo, only a high-cheekboned stand-in who patiently sat in the car when about halfway through the 4-hour shoot, the white Fiat broke down.

Normally it would be no big deal for a car in a commercial shoot to break down. Many car commercials are shot with long lead times and must use pre-production or pilot production cars, vehicles that haven’t had all the bugs worked out. Morales, though, blogged about this in mid October and said that the video shoot was “a few weeks” earlier than that. This means that the commercial was shot long after the 500 went on sale here and that it was most likely shot using a regular production North American 500, out of the factory in Mexico. 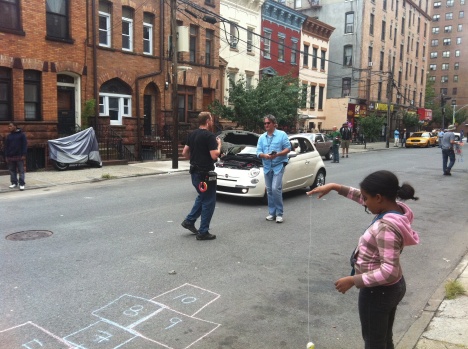 Referring to the 500’s breakdown, Morales points out that “This little detail was clearly left on the cutting room floor!”. Well, no company is going to publicize mechanical breakdowns, but Fiat in particular has to be sensitive about things like this happening and going viral. The brand hasn’t been sold in the United States for three decades but instead of starting with a blank slate, the brand is hampered by a legacy of unreliability.

That legacy just doesn’t seem to want to go away. The Smoking Gun picked up Morales’ post and published one of his photos, the one with Lopez’s body double sitting behind the wheel while two men poke around under the hood. The very first comment on the post at TSG made a Fix It Again Tony joke.

This entry was posted in Advertising. Bookmark the permalink.