Posted on November 28, 2011 by Ronnie Schreiber 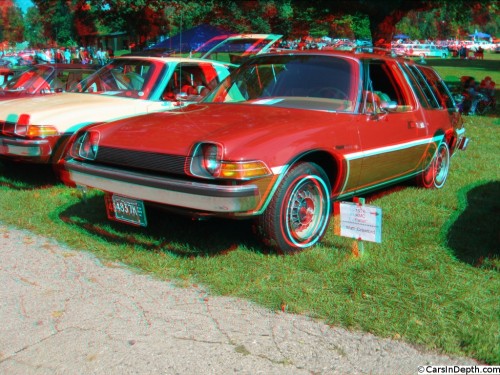 Click on the anaglyph S3D image to launch a Flash player and view the entire photo gallery in 2D or your choice of stereographic 3D formats.

The AMC Pacer is one of those cars that people think is funny looking but they all love them anyhow. Their odd shape, with a very short hood, was determined by AMC’s intention of powering the car with compact Wankel engines bought from General Motors. In the early 1970s, GM spent big money developing a rotary engine, and then walking away from the project as it neared production. You can see a prototype GM rotary at the Ypsilanti Automotive Heritage Museum. By the time GM killed the project, AMC had already committed itself to making the Pacer, whose major selling points was the interior space of a full size car with compact exterior dimensions. That was accomplished by making the Pacer very wide and giving it a large greenhouse. At the Orphan Car Show, you had a wide choice of Pacers to choose from including Pacer sedans, Pacer wagons, two tone Pacers with wild ’70s upholstery and even one “woodie” Pacer . Most of them were in original condition, many were single family cars. 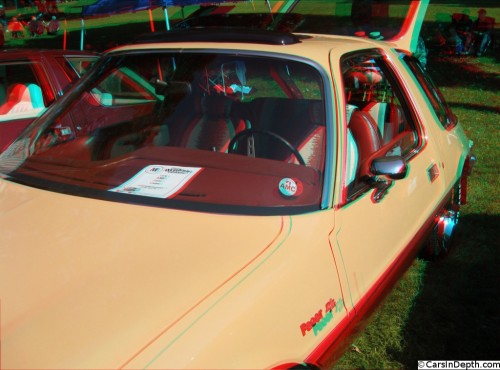 Note the wild 1970s vintage upholstery in this 1976 Pacer D/L
Click on the anaglyph S3D image to launch a Flash player and view the entire photo gallery in 2D or your choice of stereographic 3D formats.

29 Responses to 2011 Orphan Car Show: A Plethora of Pacers